Returning "Souvenirs" of WWII, to remember and to heal

A network of WWII veterans on both sides of the Pacific Ocean, the U.S. and Japan, found a way to return items that they had collected during the battle of Iwo Jima.  We looked into the story of veteran soldiers looking to make amends and heal the old wounds of war, but also into how the story came about for CNN.

The full special is the next episode of World's Untold Stories – find details and air times at www.CNN.com/WUS

Locked Up & Forgotten, an Update from Kenya

It aired as part of World’s Untold Stories back in March. Well, he’s following up on the story of Eudias and her son Kennedy, who suffers from cerebral palsy.

Here now is David’s update, followed by Michael’s chat with David on how the documentary has changed the life of this mother and son.

They're the youngest inmates in South Africa's prison system.  But it wasn't any crime of theirs that landed them behind bars.  Instead, it was the misdeeds of their mothers.  A controversial policy allows pregnant inmates in Johannesburg to keep their children with them as they serve out several years of their sentences.  Robyn Curnow covered the story for Inside Africa and filed this BackStory.

Babies Behind Bars in South Africa

Many of them are barely old enough to crawl.  And they're learning to walk by grabbing on to the cold steel bars of a prison cell.  Robyn Curnow filed a heartbreaking BackStory from inside a Johannesburg prison, where more than two dozen children are being raised by their imprisoned mothers.

Robyn talked with Michael about what it was like, as a mum to two young children of her own, to report on this story.  And she explains why she believes the prison babies are actually better off than some of the South African children living outside of jail.

In Kenya, traditional beads that bring suffering for girls

The Samburu tribe in Kenya is known throughout the country for its lavish beaded adornments.  The tribe is poor, so these pieces of jewelry are quite valuable to the community.  But their significance isn't just monetary.

In one tradition of the Samburu, a male family member will place these beads around the neck of a young girl in the tribe.  According to tradition, the man is then permitted to have sex with the girl.  It is something that has gone on for as long as the people of the Samburu tribe can remember.  And stories of hidden pregnancies, and violent abortions aren't uncommon in this part of the country.

David McKenzie went to visit the Samburu with an activist who is working to stop this practice.

Mutilated and Forced to Beg in Bangladesh

Sara Sidner's shocking report for the CNN Freedom Project introduced us to a young Bangladeshi boy who was approached by a local gang and ordered to beg on the street for profit.  When the child refused, the gang beat and mutilated him.  But, tragically, he's not alone.  As Sara learned, it's an all too common occurrence for street children in southeast Asia.   Michael talked with her about her reporting.

Child Mutilated for Refusing to Beg

Sara Sidner brings us the stunning story of a young boy who helped uncover a criminal gang that, for years, has been maiming children and forcing them to beg for money on the streets of Bangladesh.  When the gang approached the small child, he refused, and paid a heavy price for his denial.

This week's edition of The Revealer on BackStory takes us to the bustling metropolis of Istanbul.  Turkey's largest city is home to the spectacular Hagia Sophia monument, considered one of the finest examples of Byzantine architecture.  The building began life as a Christian church, but became a mosque during the Ottoman Empire.

The Hagia Sophia is now a museum visited every year by more than two million people.  Many visitors think they know everything there is to know about the building.  But, a Byzantine expert takes us on a tour revealing many of the museum's little-known secrets, many of which are hidden in the building's beautiful mosaics. 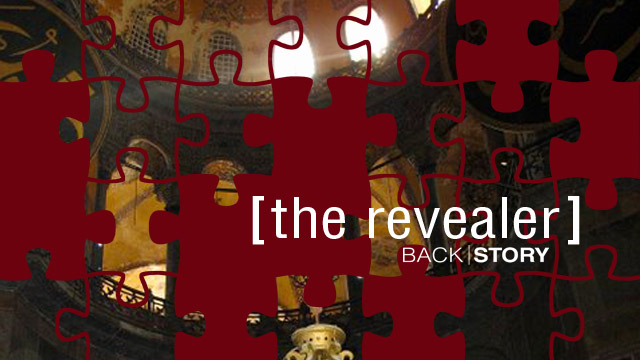 The Mosaic of History: The Revealer Clue #1

This week on Back|Story, "The Revealer" will take us to a city with a very rich history and a monument whose ancient treasures are still being revealed. Those treasures are literally imprinted on its walls. And “The Revealer” will put the “mosaic” together to tell an incredible tale.

Take a look at the clue above. Try to guess what Thursday's segment of "The Revealer" is about.