In China, after he finished shooting his new movie "Flowers of War", actor Christian Bale traveled with a CNN crew to visit Chinese activist Chen Guangcheng.   The "Batman" actor said he admired and wanted to meet Chen, a blind self-taught lawyer who has spoken out against China's One Child policy and forced sterilizations.  Chen and his family have been under house arrest in their Shandong Province village for some time now, but as recently as last week, the government had apparently eased restrictions on the Chen family allowing them to receive a delivery of medicine, and permitting his 70-year-old mother to go out and get groceries.

When Bale and the CNN crew tried to enter Chen's village, a group of unidentified men stopped them and forced them to leave.  See a full report on the altercation HERE.

John Vause spoke with Christian Bale about his experience.  (See that above)

Iraq as the War Ends

CNN's Michael Holmes gives us a look, through his camera lens, at some of what he has been working on while in Iraq. The U.S. says it will end the war in Iraq by the end of 2011. 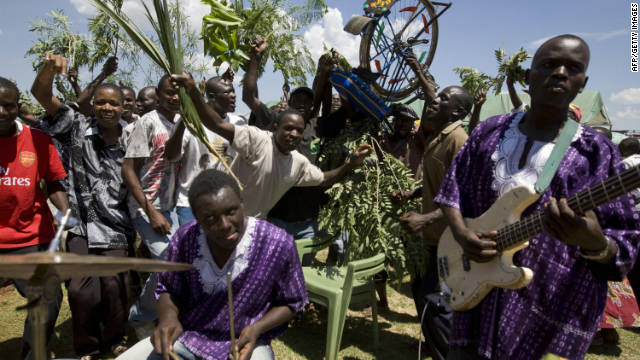 The High Cost of Saying Goodbye

Across Africa, laying a loved one to rest can be an event rivaled by none other.  In some cases, funerals are more important than marriages and births, and no expense is spared.  But as our Robyn Curnow discovered, even the simplest of funerals can put many families in difficult financial situations.

Photographer John Wendle was recording in Kabul the moment a suicide blast happened. He shares his video and experience above.

Did you know that there is a brand new edition of the children's classic show "Sesame Street" now showing in Afghanistan? Pretty cool, huh! We wanted to learn more about the production of "Sesame Garden" in Afghanistan, so we called on Sherrie Westin, the executive vice president of Sesame Workshop.

The Revealer: The Pantheon

The Pantheon is one of Rome's most famous structures. It's long been held up as a temple to the gods. But new research suggests there's much more to the building than meets the eye. And as Nick Glass shows us in this week's edition of "the Revealer" - it's all a matter of lighting.

The winner of this week's revealer quiz is "Cyben."  Thanks for playing!

Here is clue number three for this week's segment of The Revealer. Take a guess in the comments section below and be sure to tune into Back|Story on Thursday where the name of the winner will be announced.

Comparing the Good and the Bad: Living in the Favela Rocinha

CNN's Shasta Darlington reports from Rio de Janeiro on a recent "pacification" of the favela Rocinha.

For their participation in these reports, Paul Sneed and the Back|Story team would like to thank religious leader Pai Almir who lives in the favela Rocinha. Also a big thank you to Viviana Rodrigues who is a teacher in Rocinha and co-founder of 2bros.org. A big thank you, as well, to Sergi Navarro-Rivero, a Harvard PhD student who is working in Rio de Janeiro and filmed the Rocinha resident interviews for this segment; and finally, thank you to Marcos Burgos, an American community activist and CUNY PhD student living in Rocinha who helped with logistics. Thank you to everyone for coming together to make this segment happen.

Here is clue number two for this week's segment of The Revealer. Take a guess in the comments section below and be sure to tune into Back|Story on Thursday where the name of the winner will be announced.