The little team that could

The tiny town of Kiryat Shmona in Israel wins the Israeli football league title. CNN's Matthew Chance takes us to one of their matches. 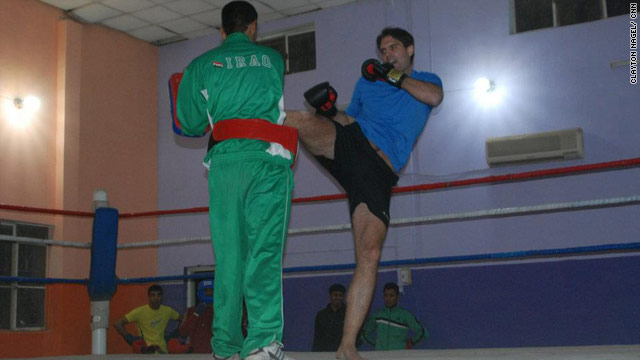 Not all regions of Iraq have been impacted by sectarian violence. The oil hub of Basra is seeing a big boom in economic growth. Frederik Pleitgen takes us to Iraq's second largest city.

While in Basra, Frederik Pleitgen discovered that the sport of boxing can transcend language barriers... And it turns out Fred isn't bad in the ring!

Long before Rory McIlroy sank his final record-breaking putt at the U.S. Open, his hometown of Holywood, Northern Ireland already knew he was a winner.  Our Dan Rivers spent the day on the budding golf legend's home course, and came across a young man with a familiar name... and a pretty wicked stroke.

World Sport’s Alex Thomas, Photographer Beau Molloy and Producer Chris Eldergill were in Mumbai for Wednesday’s Cricket World Cup semifinal win by India over Pakistan. The mood in the street was electric. Producer Chris sent us this note, describing what it was like to be there.

"Cricket is a religion in India. Just another cliché right? Whilst that may be so, the way the people of Mumbai celebrated Wednesday’s victory over Pakistan showed a level of faith rarely seen in the sporting arena. The three of us dashed across parts of the city in an attempt to consume this ‘religion’, and from the slums to the swanky bars, the Indian people united behind their ‘Cricket Gods’. We as a team have experienced many sporting arenas and fan cultures as journalists travelling the world, but this experience is left us all with goosebumps, and had us thinking, 'How on earth are the Indian people going to eclipse this come Saturday evening against Sri Lanka?!'"