Homs, Syria: A City Under Siege

Rescue crews are evacuating wounded and sick women and children from the besieged Syrian city of Homs, a spokeswoman for the International Committee for the Red Cross said Friday. When asked if international journalists wounded in the city would be brought out, Carla Haddad Mardini said the mission was "to evacuate all wounded and sick in urgent need of medical assistance without any exception."

French photojournalist “Mani” experienced the battle in Homs firsthand. Watch for Nic Robertson's interview with “Mani” this weekend on CNN. But first, Channel Four's Jonathan Miller gives voice to “Mani’s” incredible images in this special report from a Syrian city under siege. Please note, there are graphic images in this piece that may disturb you.

Syria: Cut off and under fire in Homs

Relentless shelling forces families underground in Homs, Syria. CNN's Arwa Damon, safely back in Beirut, talks about her experience there. 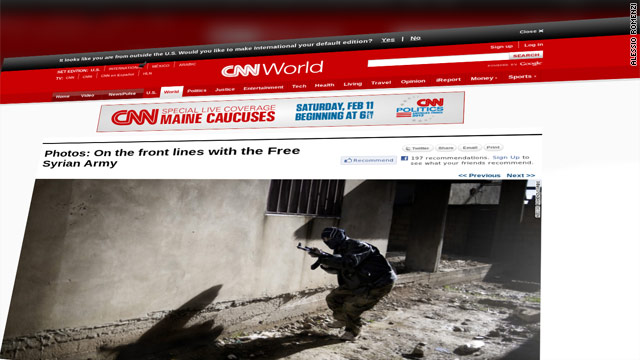 Syria has restricted journalists from entering the country, so it has been difficult to document the horrors of this conflict. But CNN.com has posted some chilling photos commissioned by Time Magazine. Here is the link to those photos by Alessio Romenzi.

Unraveling the Massacre in Jisr al-Shugur

One of the biggest unanswered questions of the uprising in Syria is what really happened in the town of Jisr al-Shugur.  The Syrian government says troops were ordered into the area when armed gangs tried to take over.  But the opposition says dozens of peaceful protesters were killed.  Arwa Damon tried to get to the heart of story during a recent trip into the town.