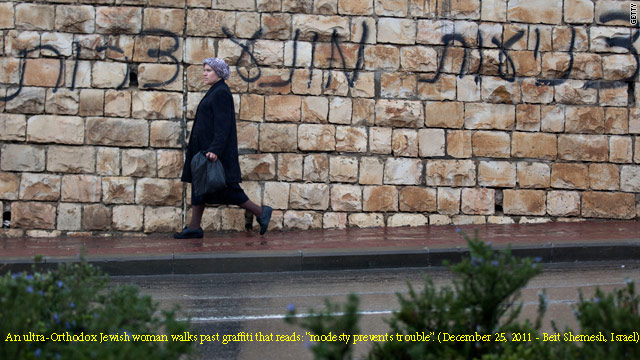 Last week, we told you about the nasty sectarian battle brewing in Israel between ultra-Orthodox extremists and more moderate religious Jews. Well as Kevin Flower reports, the debate definitely isn’t going away. 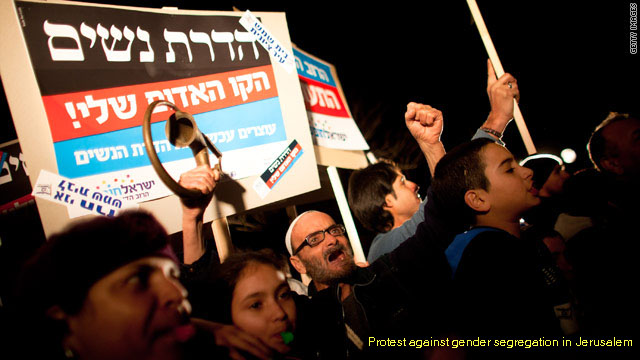 An ultra-Orthodox man has been arrested and charged with sexual harassment in Jerusalem. Moshe Fuchs allegedly called a 19-year-old female Israeli soldier a "prostitute" and a gentile when she refused to move to the back of a segregated bus earlier this week. The incident highlights the simmering debate over gender segregation playing out in Israel right now. We addressed the issue and the face-off between ultra-Orthodox Jews and more moderate religious Jews during Thursday's show.

CNN's Kevin Flower reports on the situation playing out in Beit Shemesh:

Rabbi Dov Lipman leads a protest against religious extremism in the Israeli city of Beit Shemesh:

CNN's Reza Sayah talks to Pakistani locals about what Christmas means to them.

Photographer John Wendle was recording in Kabul the moment a suicide blast happened. He shares his video and experience above.

New York (CNN) – Help wanted: Someone who can sit in one place for hours on end, has the hand-eye coordination of a brain surgeon, a yogi’s power of concentration, a linguist’s knack for languages – especially ancient Hebrew – and a monk’s ability to work alone in contemplative silence, all while avoiding impure thoughts.

The hypothetical job posting, which you’re not likely to see in the classifieds, is for a sofer, or Torah scribe.

Every day, scribes around the world spend painstaking hours writing new Torahs – which contain the first five books of the Bible – by hand and restoring damaged or old ones that show the natural ravages of time that could make the scrolls unusable for services.

Such was the case for a Torah at Manetto Hill Jewish Center in Plainview, New York. Until recently, the Torah sat in disrepair in a showcase in the suburban Long Island synagogue after the congregation adopted it in 1974.

It is one of 1,564 Torahs from the former Czechoslovakia that made it out of the ashes of the Holocaust into Jewish hands, in the form of the Westminster Synagogue in London. From there, the Torahs were distributed to synagogues around the world.

During World War II, the Nazis confiscated this Torah, also known as number 559, from a synagogue in Kolin, about 35 miles east of Prague. The Nazis were known to confiscate sacred items.

The town’s Jewish community was deported to the Theresienstadt concentration camp in what is now the Czech Republic, where most were killed.

Rabbi Yochanan Salazar, a scribe with Sofer on Site, a North Miami Beach, Florida-based organization, restored the Kolin Torah, which he calls a “survivor of the Holocaust.”

He cleaned some sections that had been damaged and completely rewrote other parts.

For Salazar, the restoration carried deep personal meaning. His grandfather was the only one from his mother’s side of the family in Poland to survive the Holocaust. Salazar was born in Ecuador and moved to the United States as a teenager.

Based on font style, type of parchment and other revealing details, Salazar estimates the Kolin Torah is at least 200 years old.

“Each time the Torah is used, not only is it a living part of our community, it is a testament to the continuity of Jewish life and the failure of Hitler’s Final Solution,’” David Ross Senter, Manetto Hill’s rabbi, wrote on the synagogue’s website.

Over the years, many Torahs from Holocaust-torn Europe were stashed in damp storage rooms, where they suffered damage.

“If there is anything that prevents the Torah from being used, we restore it back to its valid status under Jewish law,” said Salazar, who works with a quill and black ink.

The quill must be made from a kosher bird, such as a goose, turkey, or other animal so that the words in the Torah “will be in your mouth,” Salazar said. “Therefore it must be something that has to be allowed in your mouth.”

Jews believe that the Torah was handed down from God. It contains the Pentateuch, which begins with Genesis and ends with Deuteronomy.

Handwritten on the skin of a kosher animal, such as a cow, goat or lamb, the long scroll has two wooden rollers on each end. Each text contains nearly 305,000 letters, more than 79,000 words and 5,845 sentences, according to a video on Sofer on Site’s website.

Holes or other defects in the parchment are patched with white glue and Salazar uses soft tissues to remove dust and high-polymer erasers that don’t leave much residue.

“You really only have one chance to get it right,” with a very old and delicate Torah, Salazar said.

“Once you write that letter, you don’t have another opportunity to correct it,” said Salazar, who was trained as an electronic engineer and who became a sofer in 2004. “Every letter is written carefully and slowly.”

If a mistake is made in writing a Hebrew letter, the sofer must wait for the ink to dry and scrape it off. If a shadow remains, it is not considered ink and may be written over. Restoring the Kolin Torah took about six months and cost about $14,000.

Most errors can be fixed. But a few, such as if the scribe were to forget to sanctify God’s name aloud while writing it and can no longer remember where the reference was, require that the Torah be buried.

Nothing of the sort has happened to Salazar, who, like any scribe, makes mistakes. He could not recall any slips of the hand while restoring the Kolin Torah.

The Kolin Torah was re-dedicated at Manetto Hill, a Conservative synagogue, on May 1, Holocaust Remembrance Day.

It will appear on the synagogue’s podium for use during high holidays, bar and bat mitzvahs and weddings.

“We’re sort of like saying to ourselves and the souls of the departed, ‘You know we haven’t forgotten you. We know you’re there. We know you’re watching us. We know what you went through,’” Salazar said.

The final commandment says every Jew must write a Torah.

Scholars say that taking part in restoring one, as the members of Manetto Hill have done, counts just the same.

Explain it to me: Ramadan

No food? No drinking? No sex? It's the Muslim month of Ramadan. CNN Religion Editor Dan Gilgoff explains more about this practice from CNN's Belief Blog.

The language of Christianity

Christianity is a like a language with different dialects and over time some common terms and phrases have lost their essential meaning. Kirby Ferguson takes a closer look at the language of Christianity in the video, while John Blake provides further context in CNN's Belief Blog.

Followers of a fringe Christian group led by the preacher Harold Camping believed the world was going to end on May 21st.  CNN rode along with a group of "doomsdayers" as they toured the U.S. spreading their message. To read more about this story from Jessica Ravitz, check out the Belief Blog at CNN.com/Belief .