Here is clue number two for this week's segment of The Revealer. Take a guess in the comments section below and be sure to tune into Back|Story on Thursday where the name of the winner will be announced.

Take a guess. This week's Revealer will air on Thursday. Place your guess in the comments section below this post.

The Sydney Opera House is a masterpiece of late modern architecture, and an iconic feature of Australia's culture.  Now, pretty much any tourist - and most Sydney-siders - will tell you the great white shells of the structure are meant to reflect the sails of the ships cruising through the city's harbor.  But there's actually much more to that story, as “revealed” to us by Bridie Barry.

It is one of the most stunning examples of modern architecture in the world.  Reporter Bridie Barry asked a few people what they thought the design was based on.  Based on their answers, can you guess which super famous structure we’ll be featuring this week on The Revealer?

The architect behind the famous building that we’re featuring on this week’s Revealer used a fascinating concept to explain his design. It’s called the ‘spherical solution’ and is illustrated here. Can you guess the name of the building – and the architect?  Submit your guess in the comments section.  We'll announce the name of the first person to get it right on Thursday's episode of BackStory!

Okay, guys, we're trying to make the clues a little more challenging!  So here's my challenge to YOU:  give us your best guess WITHOUT using the internet to search for clues!  Come on, that's not the spirit of the game!  Watch as reporter Bridie Barry offers up the first clue as to the topic of this week's episode of BackStory's signature series, "The Revealer."   Then enter your guess in the comments section.  On Thursday's show, we'll read the name of the first person to get it right!

November 10, 2011
(CNN) –Hidden near Oxford Circus – the center of London’s bustling shopping district – stands a building which resembles a relic from England’s Elizabethan past.

Four million people walk through the wooden archways of Liberty each year into a wonderland of treats and treasures.

Its black and white exterior is characteristically British – a style favoured by the Tudors.

And yet, the building isn’t Tudor at all. In fact, it’s less than one hundred years old.

For those willing to take a closer look, history reveals a secret with a surprising twist: Liberty’s famous façade was rigged from the wreckage of two wooden warships – HMS Impregnable and HMS Hindustan.

Both were battleships built for Britain’s prestigious Royal Navy.

"Britain lived and died by its Navy and its Navy's performance,” said Andrew Baines, historian and Curator of HMS Victory in Portsmouth, on the south coast of England.

“So even though these were old ships that had been broken apart, they would still have a certain amount of kudos to them and their use in Liberty would have carried some of that kudos through," he said.

The size and scale of HMS Hindustan, a sailing ship, is in fact reflected in the whole front façade of Liberty.

"Hindustan is ordered in 1819 but work only starts 10 years later on frames that had been brought from the Far East – teak frames. It takes them until 1841 to build her,” Baines told CNN.

The other ship, HMS Impregnable, was a rare three-deck ship. Ordered in 1854 as HMS Howe and later renamed, she represented the ultimate development of the wooden battleship.

“She is viewed as being a very impressive ship,” Baines said. “She is the largest wooden-hulled ship ever employed by the Royal Navy.”

Both ships had the best quality timber and after a period of service as training ships, they were sent on a course bound for the dockyard, where they were broken up and sold in 1921.

Meanwhile, in the heart of London’s shopping district, Liberty’s flagship store on Regent Street was looking to expand.

Almost four decades after it first opened, Arthur Liberty, the founder, wanted to create a larger store that still maintained an intimate feel. Using the timbers from HMS Impregnable and HMS Hindustan, he turned to the Tudor age for inspiration.

“It’s importing a bit of heritage isn’t it?” John Graves, Curator of ship history at the National Maritime Museum said.

“I think to the well-trained eye, it’s easy to tell once you’re inside Liberty and you are admiring the staircases and so on. You can see the minor imperfections in the wood that they have been recycled from old warships,” he told CNN.

Other little clues allude to Liberty’s nautical history – a wooden carving of sailing ships above a doorway, a stained-glass ship hidden in the corner of a window, blue and white tiles depicting the Navy’s finest.

Anna Buruma, Liberty’s company archivist said, “Liberty is rather special. It has always been a very quirky shop and it suits this building.”

Sadly, Arthur Liberty never lived to see the completion of the magnificent building that still bears his name.

In the clue today, the Historian here says:

“This is preservation in a different context and it's a very unusual form of preservation, but I think at the time, it was just considered to be emphasising the Britishness of the building; and making it stand out as a destination shop”

Take a guess in the comments section below. Watch Thursday, live on Back|Story, when the person with the correct guess will be announced after this week's installment of The Revealer.

The Revealer clue number 2: Guess what's in the video

Where is this? Tucked away in a major city, this building is designed to give an atmosphere of the Elizabethan merchants. 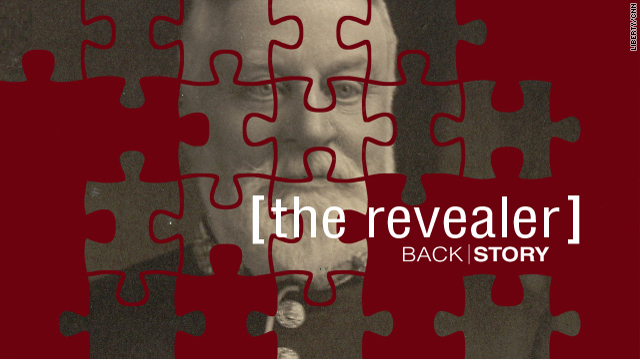 Can you guess who this is and what he was famous for?  Born in 1843 in Buckinghamshire, UK – he considered himself a merchant adventurer – travelling the world importing objects from Japan and elsewhere in the Middle East and North Africa.   He was very much associated with beautiful textiles that are still sought after, even today.

Think you know who it might be?  Submit your guess in our Comments section, and keep checking back for more clues in the days leading up to Thursday's big Reveal!  If you're the first person to get it right, we'll give you a shout-out during Thursday's BackStory.